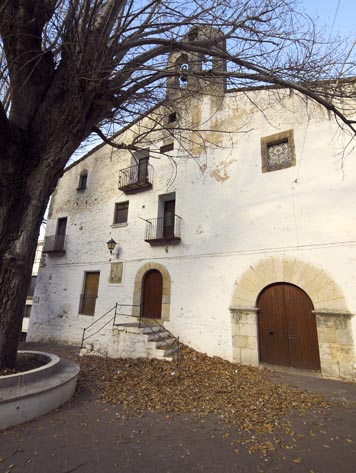 The miracle of the old blind woman who was cured upon washing allegedly occurred circa 1540. The first procession to L’Avellà took place in 1545 to ask for water following the great drought.  Incredible rain fell that very night. The first mass was held in 1549. The little chapel safeguarding the fountain was built in 1578. The primitive church and house were replaced and later successively expanded. Work began on the first floor of the House of Avellà in 1589. The inn dates back to the 18th century and the Casa de Banys to the 19th century.

Nowadays, the inn reflects a recent remodelling project as it’s been turned into a modern rural tourism hotel. The old name and purpose of the Casa de Banys has been recovered and, thus, modern hydromassage rooms and a gym have been installed on the ground floor.

Situated in the Our Lady of L’Avellá Springs, it was declared of public interest in 1928 because of the medicinal mineral waters. Just outside Catí, towards the Vinaroz and Morella roads, there’s a road that leads up to L’ Avellà.