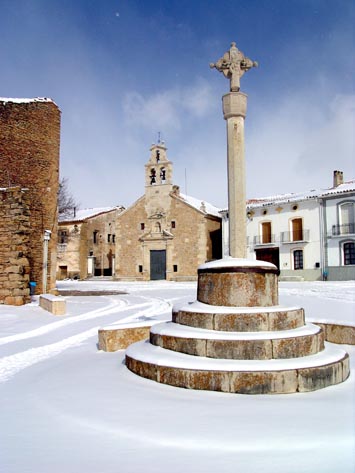 Dedicated to the Patron Saint of Vilafranca.

An interesting architectural complex formed by the ermita or small church (mass on Wednesdays in summer), the adjoining hostelry, the porch, the houses and animal pens. The current temple, built on the site of an older Gothic building referred to in 14th-century texts, was completed in 1683.

It has three naves and is topped by a barrel vaulted roof. The Baroque gateway has a three-bell gable. In 1455, the artist Valenti Monoliu was commissioned to design an altarpiece dedicated to the mother of God. It is currently housed in the town’s tourist office. The 19th-century porticoed building known as the ARCS DEL PARE PLACID stands in front of the ermita.

It owes its name to a cloistered monk from Vilafranca who was expelled from Benifassà during the Mendizábal disentailment. He began this construction in order to completely close off the ermita with a fortified square. The construction was meant to offer pilgrims the best hospitable conditions, to be financed with alms and above all, with his own wealth. When Padre Placid died, the works were halted and ultimately, left incomplete.