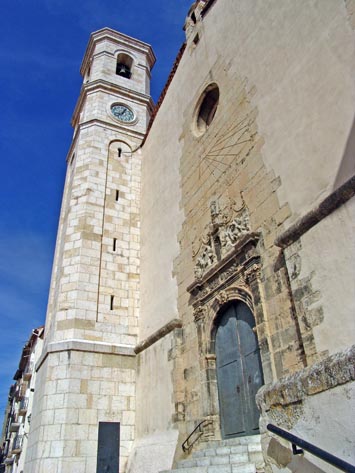 The church was built in the period between 1567 and 1572, on the site of the former Gothic temple dedicated to Santa María. It is a magnificent Plateresque temple with Gothic and Renaissance elements, all beautifully harmonised.

Its construction was overseen by the architects Pere Masseres and Raimon de Pertusa, and it is one of the best examples of 16th-century Valencian religious architecture. The church which is dedicated to Mary Magdalene, has a notable presbytery, the almost flat vault which holds the choir, the distinctive group of carved stones, the Plateresque doors of the sacristy and the gateways of both façades, are all worth observing.

The 18th-century communion chapel holds a magnificent altarpiece dedicated to San Miguel, painted by Bernat Serra between 1429 and 1431. It originally belonged to the ermita of the Saint in Pobla de Ballestar. Due to rural depopulation, the altarpiece has been relocated to the parish office for safekeeping. The chapel also holds the tabernacle for which the artist Vicente March was awarded the National Award for Gold and Silversmithing in 1947. The current bell tower is actually quite recent.

The old bell tower was finally demolished on 15 July 1903, as it was threatening to fall on the school building. In 1911, works on the tower as well as the church square were finally completed. Five new semicircular steps were placed at the entrance to the temple. It is undoubtedly, one of the last works to be carried out with ashlar blocks in Castellón.

It is also the only bell tower in the Valencian Community where the bells are rung by women.

The parish museum has an excellent collection of religious garb, along with valuable gold and silver art objects. See museum section.

Tour of the town.