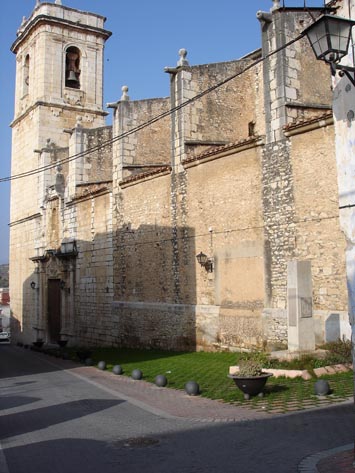 Erected in the 14th century, it was rebuilt and enlarged between 1622 and 1659, the year in which it was definitively finished.  However, a whole series of details were added later such as the main altarpiece (no longer conserved), the main entrance door dating back to 1758 and the mural painting of Our Lady of Perpetual Help from 1900, among others.

The magnificent construction of the parish building is the result of the Renaissance trend spread throughout the country, which harmoniously combines austerity with classic trends. As a result of the 1936-39 war, the inside of the temple was completely emptied, dispossessed of all altarpieces and ornaments.

A campaign began following the end of this war to complete the construction of new altarpieces.  Most of them are the work of master artisan Daniel Chillida.  Worth highlighting, due to their relevance in terms of the lines and splendour of the details, is the one found on the main altar dated 1950 and dedicated to the town’s patron saint, St. Lawrence.