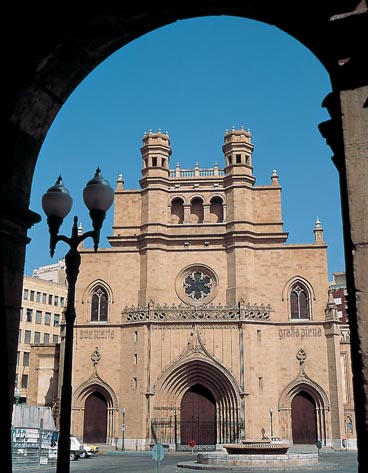 The Church of Santa Maria la Mayor is the co-cathedral together with the Segorbe. Both are the seat of the Bishop of Segorbe-Castellon. The history of this Cathedral is full of ups and downs since the beginning of its construction dating back to the 12th century.

From the original gothic church only remain its three access doors, as well as ornamental elements. The temple was demolished by the municipal plenary session agreement in the 1930s and reconstruction work culminated finally in 2001. The oldest door is located in Arcipreste Balaguer Street.

Access by de la Hierba square presents vegetal decoration on the capitals, while the main entrance is a Gothic more advanced than the previous. Inside is an image of the Immaculate Conception of the eighteenth century, Baroque images, several interesting canvases as well as jewelry pieces and other ornaments.

The Cathedral of Santa Maria is classified as asset of Cultural interest, and ranks inscribed in the National Heritage and Cultural Heritage of the Generalitat Valenciana.