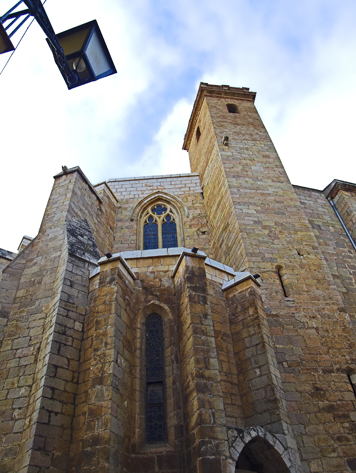 In 1233, King James I commissioned the Order of Saint John of the Hospital the construction of a large temple to commemorate the first great victory in the conquest of the Kingdom of Valencia.
With a Romanesque floor plan, the Church of El Salvador started to be built under an early Gothic style, to which several Roman elements were added. The apse dates back to the 13th century and is comprised of seven sides with radial apsidal chapels without an ambulatory. The church was complemented by a range of modifications which turned it into a fortress church, by building two twin towers, of which only one was finally erected, which flanks the apse and is linked via a parapet walk which provided access to the highest parts of the wall. This church was the place in which Valencian Gothic architecture was associated for the very first time.
The build was erected with a single storey nave, covered with ribbed vaults and elements using brick. It also boasts a crypt under the apse, used for burying the parish priests who had headed the church, when they so requested this.
During the mid 14th century, the bell tower was built and subsequently, during the 18th century, the Communion Chapel was added to the Gothic nave. This building includes a Greek cross floor plan in a Neoclassical style, crowned by the dome and decorated on the inside by four frescos by Vergara, which represent an allegory of the Church showing salvation to the world: the Deesi, The mystical weddings of Christ and the Faith.
In the early days, the Church was dedicated by James I to Saint Mary, but in the mid 14th century it was to be dedicated to El Salvador. In 1969 the entire ensemble was declared a National Monument of Historic and Artistic interest and currently holds the title of Minor Basilica.