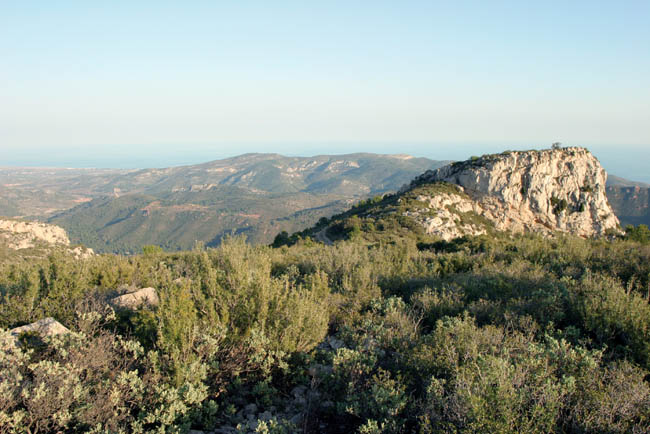 The Desert de les Palmes is surrounded by a coastal mountain range within the Plana Alta county, parallel to the coast, with many ridges and rocky outcrops.

The protected area ranges over 3,200 hectares; the highest peak is 729 m. and it is named Bartolo peak. From there visitors can see the inland areas of Castellón, the gulf of Valencia and the Columbretes Islands. Near the peak there is a monument, known as the Bartolo Cross.

In the Desert de les Palmes mountain range various mountains can be seen, such as the Sierra del Desierto, the Sierra de Les Santes and Les Agulles de Santa Àgueda mountain ranges. The latter are a series of sharp sandstone peaks. Although normally dry, various river-beds carve through these mountains, such as Farches, which flows into the sea, and Miravet, which forms a small valley, farmed in some areas.

The geological features of the beauty spot are very interesting, the predominant maritime sandstone contrasts with the smooth lines of the surrounding area. These rocks are typically red or dark maroon, the soil is normally poor in lime, loose and, in general, offers a good quality soil for the type of plant life of the area.

From a botanic point of view this is a valuable enclave, as it houses interesting plants, some of which are quite rare or nearly extinct.

You can find a large number of typical shrubs, such as Arbutus, Snowy mespilus, Heather, Spurge flax, Mediterranean buckthorn, Butcher’s broom, Juniper, Terebinth and Fan palm plus climbing plants such as Rubia, Ivy or Rough Bindweed.

There is a micro-reserve of flora in Les Agulles de Santa Àgueda, and El Desert is occupied by formations of pinewoods including species such as the Maritime Pine, which only grows in the siliceous soils formed by red sandstone, and the Aleppo Pine, which grows in any type of soil.

The geographic location of the natural park makes it a very special area. The local populations of the nearby towns are regular visitors who come to enjoy the history, beautiful scenery and natural wealth and also to make the most of the walks whilst observing and listening to all that the area has to offer.

From Monday to Friday

DECREE 149/1989, October 16, of the Council of the Generalitat Valenciana, concerning the Declaration of the Desert de les Palmes Natural Park.