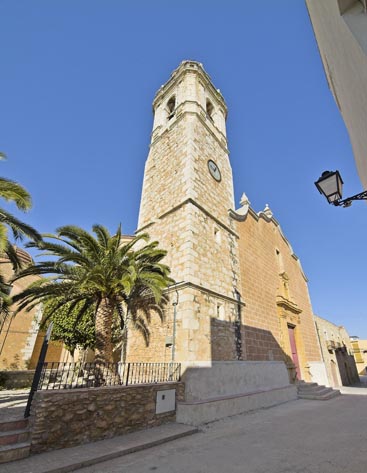 Dedicated to San Jaime, construction on this church began in 1736 under the supervision of Juan Barceló. The works, including the bell tower, were finished in 1759, as a stone engraving in the façade states.

The church consists of three naves, a transept and a dome engraved in a rectangle. It also has protective buttresses on its outside. In the transept area, next to the Gospel side, there is a domed communion chapel in the shape of a Greek cross. On the same side, at the foot of the church, is the well-designed bell tower built out of ashlars. The section holding the bell has a baluster, and is topped with a rough, octagonal cupola.

In 1790 it was decorated and gilded. The church still preserves some interesting elements of this decoration, such as the impressive sculptures of the Evangelists in its pendentives.

In 1784, the organ acquired in Valencia was installed and, although very damaged, it still exists and is significant due to its architectural forms and decoration.