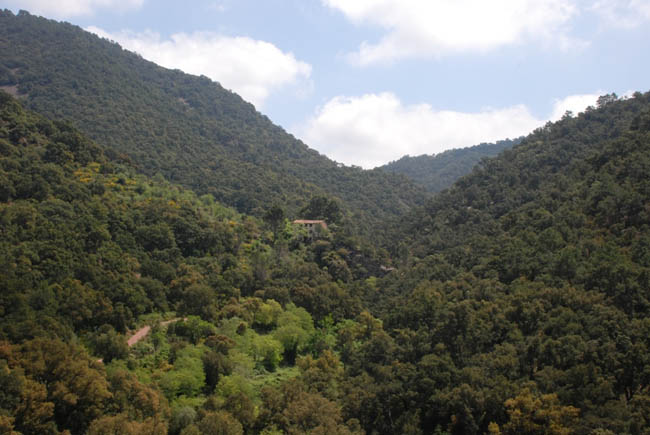 The surface designated as a park occupies 31,180 hectares.

The surface designated as a park occupies 31,180 hectares. This makes the area the largest protected natural space in the Province of Castellón and the second largest of the Valencian Community. 11 of the 19 municipal areas involved are completely within the limits of the natural park: Aín, Alcudia de Veo, Almedíjar, Azuébar, Chóvar, Eslida, Fuentes de Ayódar, Higueras, Pavías, Torralba del Pinar and Villamalur; whereas the remaining 8 townships are only partially included: Alfondeguilla, Algimia de Almonacid, Artana, Ayódar, Matet, Sueras, Tales and Vall de Almonacid.

Sierra de Espadán mountain range offers visitors a wide variety of plant life: woods of maritime pine, riparian forest, the typical Mediterranean oak forest and Aleppo pine as well as interesting rarities such as small Chestnut woods. However, without doubt, the Cork oak woods are the most representative ecosystem of the Sierra de Espadán Natural Park, due to their uniqueness and good conservation.

The fauna found in the park is the result of the diversity of landscape and environment within the park itself. Starting with the amphibians, various species such as the Common toad or the Natterjack toad can be found. However, the most interesting species is the Iberian ribbed newt, which lives in the irrigation pools.

The reptiles are represented by species such the Ocellated lizard or fardatxo, the Large Psammodromus, the Ladder snake and the Montpellier snake.

At the southern part of Castellón province, amongst the counties of Alto Mijares, Alto Palancia and La Plana Baixa, bordered by the basins of the Mijares and Palancia rivers.

Winter opening hours: Monday to Friday, from 9 to 2pm. On Tuesdays and Thursdays, from 4pm to 6pm.

Summer opening hours: Monday to Sunday, from 9am to 2pm.

DECREE 161/1998, September 29, of the Valencian Government, concerning the Declaration of the Sierra de Espadán Natural Park.