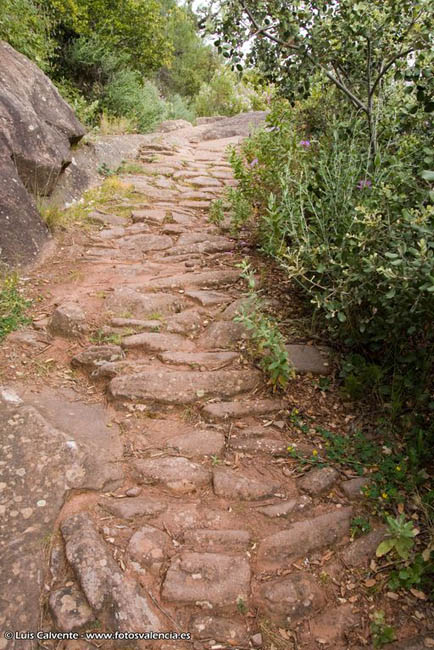 The Sierra Calderona Natural Park, which was declared in 2002 by decree of the Generalitat Valenciana, includes up to 14 municipalities, including part of the municipalities of Altura and Segorbe in Castellón, and the Valencian municipalities of Albalat dels Tarongers, Algimia de Alfara, Estivella, Gátova, Gilet, Marines, Náquera, Olocau, Sagunto, Segart, Serra and Torres-Torres.

It is an extensive area of 18,019 hectares, of unique importance due to its biodiversity and geological formations, which make up a landscape of great beauty.

The proximity to the sea and the meridian disposition of the mountain range allow the east winds to bring humidity in the form of mist and frost. The water comes to the surface in numerous springs.

The soils are of great value because of their balance in relation to the climate, vegetation and geological substrate. Each one of them houses different plant communities, but always of great botanical interest.

The sierra is home to what are undoubtedly the southernmost strongholds of cork oak (Quercus suber) on the Spanish Mediterranean coast, which are very peculiar because they grow in very dry conditions, and very few, if not unique, in the Valencian area and are mostly found in the Special Protection Area of the Natural Park. However, the dominant tree is the white pine in relatively young forests, since farming and charcoal-making made the holm oak disappear.

Some species of special relevance have motivated the declaration of several flora micro-reserves, to protect species such as the Sagunto Centaurea and the Montpellier Carnation. These micro-reserves are: the Puntal de la Bella in the town of Estivella; the Barranco del Saragatillo in Serra; the Cerro del Caballo (or Caballo Pelut) in Albalat dels Tarongers; the Montepicayo in Sagunto; the Peñas Altas and the Puntal de Navarrete in Altura.

The fauna is the most diverse. Among the different reptiles found we must highlight the ocellated lizard or fardatxo, and snakes such as the Montpellier snake or serp verda, the viperine water snake or serp pudenta, the snub-nosed adder, and bats are the most represented mammals, in the Valencian Community. It is especially significant that the vast majority of them are located within the municipality of Serra. One of the species that requires the most attention is the long-fingered bat, which is catalogued as in risk of extinction.

The heritage values that the Sierra Calderona holds are also outstanding, with numerous archaeological sites, castles, traditional farmhouses and the best-known monasteries. Thus, there are remarkable remains in the mountains corresponding to most of the civilisations that inhabited our lands since the Palaeolithic age, through the Bronze Age, the Iberian culture, Roman, Arabic and medieval periods.

Located between the provinces of Castellón and Valencia, separating the basins of the Palancia and Turia rivers.

9am to 2pm, from Monday to Friday.