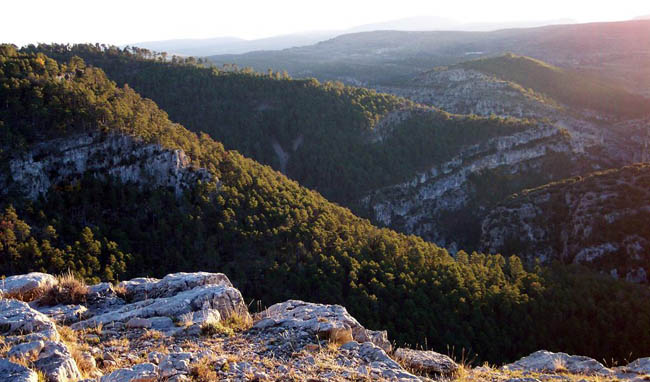 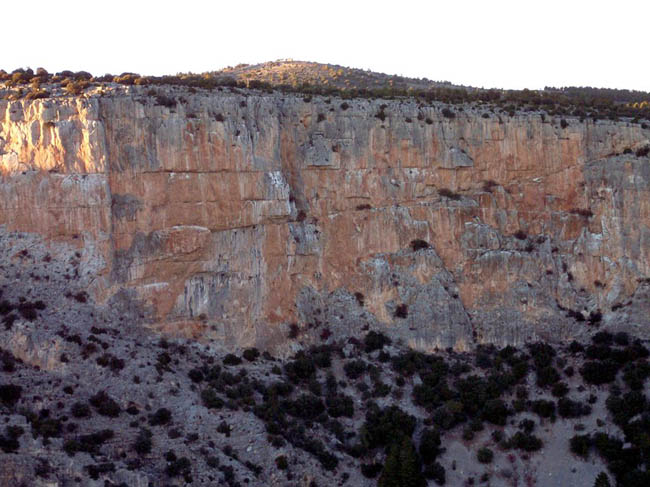 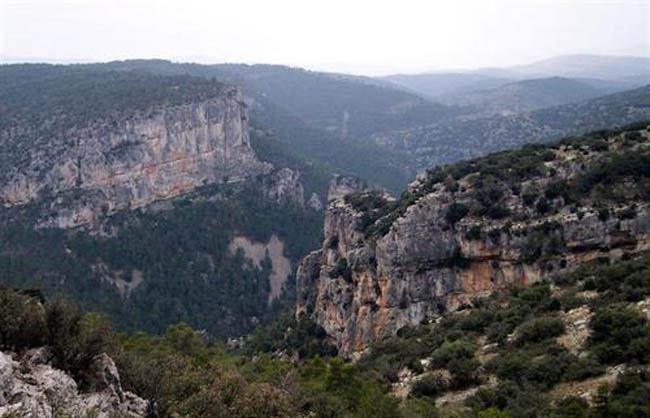 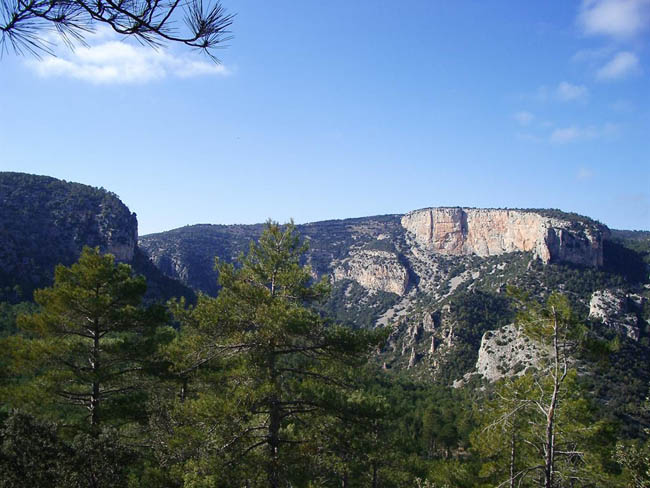 The Rambla Celumbres natural space is home to unquestionable ecological, scenic, historical-cultural values, and those related to recreational and leisure uses, which justify its protection.

The Rambla Celumbres is located in the north-eastern part of the province of Castellón, at the crossroads of the municipalities of Castellfort, Cinctorres and Portell de Morella, all of which belonging to the Els Ports region.

Its geomorphological complexity and the good state of conservation of the plant formations create a landscape of great uniqueness and beauty. The area of greatest visual quality is the course of La Rabla Celumbres itself, with its vertiginous rocky cliffs and where various scenic landmarks stand out, such as the Roca Roja (Red Rock), the Roca Parda (Brown Rock) and the Roca del Cuervo (Raven’s Rock), which are easily identifiable for the observer.

The tree masses that exist in the area are mainly made up of laricio pine groves (Pinus nigra) and evergreen oaks (Quercus ilex), the latter included as a habitat of priority interest for the European Union. They form dense and large masses on the slopes of the riverbed of La Rambla. In terms of the flora, the presence of Leucanthemun maestracense (daisy), Linaria repens (white dragon’s mouth), Sideritis spinulosa (cat’s tail), Thymus godayanus (wild thyme) and Thymus vulgaris (thyme) must be noted, all these species are endemic and are therefore of great value for conservation.

In terms of the fauna, birds are the most abundant and also include several species that require protection and conservation measures due to the degree of threat that they face, either at a regional or international level. Amongst the species of birds present are the golden eagle (Aquila chrysaetos), the common carrion (Burhinus oedicnemu), the European nightjar (Caprimulgus europaeus), the short-toed eagle (Circaetus gallicus) and the griffon vulture (Gyps fulvus), among others. Of the 88 bird species surveyed in the area, about 20% of them present some degree of threat. On the other hand, the mammals, also relevant, predators have been identified by the Valencian Catalogue of Threatened Fauna Species: the grey shrew (Crocidura rusula), the marten (Martes foina), the badger (Meles meles), the weasel (Mustela nivalis) and the red squirrel (Sciurus vulgaris), and species of international interest the Pyrenean goat (Capra pyrenaica) and the wild cat (Felis silvestris).

Regarding the historical-cultural heritage, we find in the park several archaeological site of great interest, most of which are in a poor state of conservation. Sites such as the Mas de Falcó, from the medieval era, dated between the 8th and 13th centuries, in which high-medieval scattered ceramics have been found; the Fossar del Moros and Costa de l’Albardó, formed by medieval fortification ruins; the Turó de la Cercella site, formed by remains of a small settlement affiliated to the Bronze Age, and lastly, the Abric del Turó de la Barcella, a Neolithic cave-art site have concretely been identified.

Therefore, and at the initiative of the Town Councils of Castellfort, Cinctorres and Portell de Morella, la Generalitat, in the exercise of its autonomous responsibilities on the matter, considers it necessary to declare a special protection and conservation regime for the natural values of this space.

12159 Castellfort
Telephone: 964 445 781
Location:
It is located at the confluence of the municipalities of Castellfort, Cinctorres and Portell de Morella, all belonging to the region of Els Ports.

Level of protection:
Declared as a Municipal Natural Site by the Council of the Generalitat Valenciana on 29 February 2008.