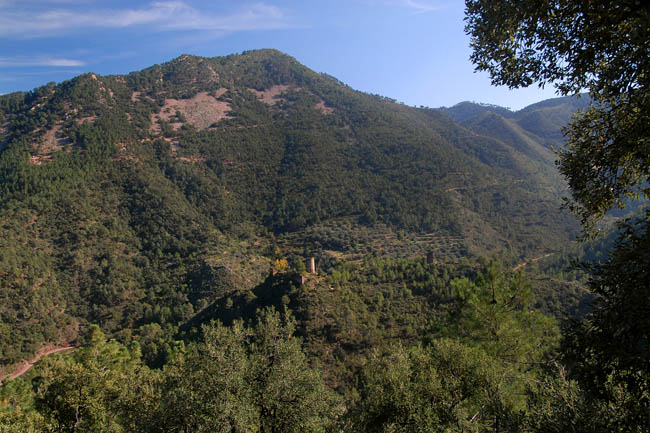 At the top of a mountain, it’s guarded by eminent pine trees.  Standing out above them is the tribute tower.  It’s the most significant piece among the remains still conserved yet in a rather ruinous state.

Of Arab origin, it was conquered by the Christian troops from the Muslims in 1238.

It was part of the group of fortifications in Eslida. It was conquered by the Christian troops from the Muslims in 1238.  It belonged to the feudal estate of Mr Dionís of Hungary in 1242, as well as the crown and houses of Jérica, the Dukes of Segorbe and Medinacelli. During the 16th century Morisco revolts, Aín became the site of all the events until the complete expulsion of the uprisers. Aín is in the local region at the foot of the Espadán Peak (1,099 m.) and on the banks of the River Anna.  The castle is of Arab origin and montane in style and features a dispersed polygonal floor plan. It has several defensive walled grounds with a Barbican auxiliary tower on the outside, water cisterns, outbuildings and a cylindrical tribute tower of unique workmanship with an interior drawbridge and moat.  It’s affixed with an Arabic inscription.  The castle is currently in ruins. The brickwork needs urgent work.