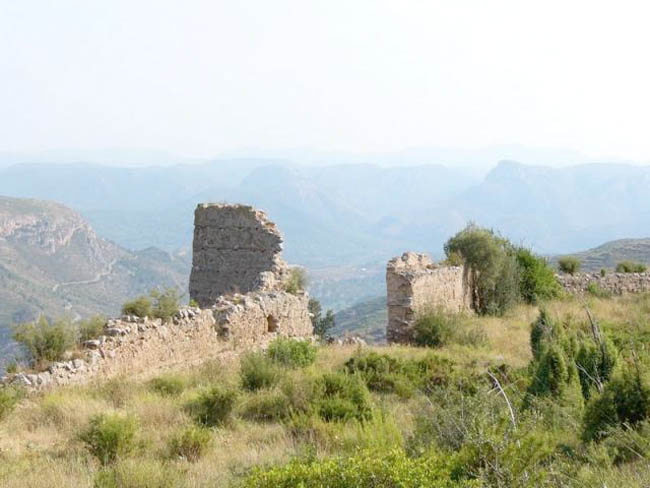 Of Arab origin, La Mola del Bou Negre Castle is enclaved in a tall mountain on the border of Argelita and Ludiente.

The castle has been known to exist practically from the 12th century. It’s a rocky mesa (butte) with what remains of a hisn (fortification) documented in 1178 which formed the border between the dioceses of Segorbe and Tortosa. It was clearly linked to the Andalusian centre of Argelita during the Islamic Age, exercising power over a large area of ​​territory that included a large population. This castle was soon no longer used.

In the 19th century, it was re-occupied by two farmhouses for agricultural tasks, taking advantage of all the stones around it for their construction.

It is currently in complete ruins, with only a few sections of walls and tower bases noticeable such as part of a tower, probably from the Christian period. It was a fortified enclosure from east to south; the rest was completely inaccessible and delimited the entire summit.

The current Castilianized name Buey Negro was documented as early as 1247. The name seems to have come from a botanical term: Bu Nerzo. Legend: "When James I threatened the population, the useful men from all over the region took refuge in Buey Negro. As the fortress was besieged, all attempts of force were useless until one dark night, more than a thousand mountain goats were gathered and tangled with hessian and resin, forcing them to go in a certain direction. Those taking shelter saw so many lights climb up the gorges and cliffs that they believed everything was lost.  Some sought a heroic death and the others fell over the gorges."