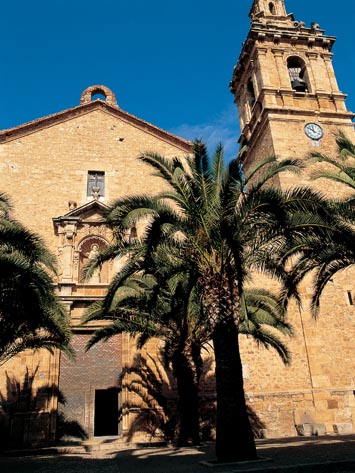 This church faces a rectangular, raised square which has two steps known as “Planet”. The square was previously a cemetery. Two palm trees frame the entrance door, making this outer section uniquely special.

The church was constructed in 1707. The Baroque altarpiece from the main altar dates back to this period. It was created by the Capuz brothers. In the 18th century, significant alterations were made such as the classicist porch that dates back to 1740. The bell tower and the church make up the top of the village’s profile, which becomes visible when observed from afar. These two architectural elements give it a certain majesty and personality.

It is a solid construction. The door of its exterior façade is balanced with the upper part of the tower, made of cut stones and topped with a singular iron-wrought cross that has an iron weather-vane that points to the direction of the wind.

The balustrade of the façade’s portico has a very well-centred image of Bartholomew the Apostle, the patron saint of this village.